Over the years I have collected figurines from places such as Hot Toys, and Sideshow Collectibles which make some amazing-looking figurines and statues, but more recently I have been completely obsessed with anime figurines. Some of them just have so much detail and manage to capture an animated character and bring it into 3D.

One of my latest obsessions has been with figures from the anime Jojo’s Bizarre Adventure. I am a huge fan of Jojo and I absolutely just love the figures that they have been releasing lately. I think the thing that makes the JJBA figurines stand out so much are all of the poses that the characters can be in. I definitely have more figures than space in the house, but I still buy them, take a look below for some of my favorite Jojo’s Bizarre Adventure figures. 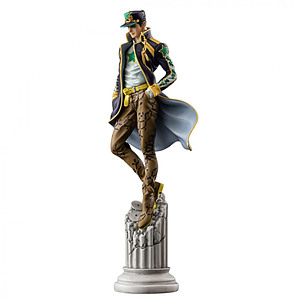 I know this isn’t exactly a figure, but it also kind of is a figure, it’s a “pen figure”. I just saw this pre-order today and I am super excited that this is getting added to this pen collection. If you guys have never seen these before, there is a whole collection of them that have been released (also some really funny bootleg versions). The entire pen is built into the figure’s body, and the tip of the pen is his show. To use the pen you just lift him up out of the base and you can start writing to your heart’s content. Even if you don’t end up using this pen, or you use this pen too much and it runs out of ink, it would still look great displayed as a figure. This pen is sold out at the Crunchyroll Store, but you can find this pen currently on pre-order over at the Japanese store AmiAmi. You can also find it for pre-order over at the Japanese store Aitai Kuji.

They also have a pre-order going right now for the Jolyne Kujo Figure Pen.

I am honestly a huge fan of the Nendoroid figures. I absolutely love all of the different poses that you can put them into and they even give you different facial expressions to go with all of the different poses that you can put them in. This particular pre-order is for the longtime enemy of the Joestar family, DIO! He comes equipped with the knives from his fight with Jotaro, a street sign that he could hold, and much more. It includes a variety of different hand parts that can be used to put DIO into poses to recreate different scenes from the series. There is even an effect that is based on his stand, The World included so you could recreate some of the most epic scenes. You can find him for pre-order on the Japanese store AmiAmi. 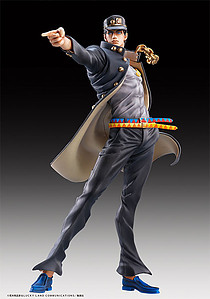 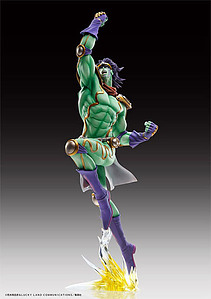 To be clear, these two figures are not sold together, but I wanted to highlight both of them because they are both a part of the same product series and because you can’t get Jotaro and not pick up Star Platinum as well. If you have come across this series of figures before you will know that they are a bit more detailed compared to some of Medicos’ other figure product series. The color schemes for these figures are modeled directed from the illustrations from Jojo’s Bizarre Adventure Artbooks. You can find both Jotaro and Star Platinum for preorder at the Crunchyroll store for a limited time, but you can also find them at the Japanese store AmiAmi.

SHIZAAA!!!, I am a big fan of the Super Action Statue product series from Medicos because just as the name suggests you can pose these figures in a wide variety of different action poses. Their limbs are moveable so you are able to shift them around to set them up in various different poses. This product series has constantly released new figures as the story has continued to progress. This release is from Part II and I believe this may be a second version in a different color, I mean look how awesome Caesar looks and he definitely deserves a second one. This figure was available from the Crunchyroll store but it is sold out, but you can still find this figure over at the Japanese store AmiAmi. 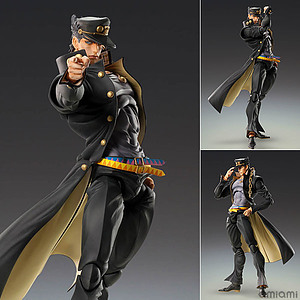 This figure is from the Super Action Statue BIG product series, which is essentially the same as Medicos’ Super Action Statue product series but nearly twice as big. The normal series figures come in at about 6 inches, whereas the BIG series figures are almost 10 inches tall. Everything else is basically the same and you can set them up in a variety of different poses. There aren’t as many BIG figures compared to the regular line but the Japanese store AmiAmi has Part. III Jotaro Kujo, as well as Star Platinum, are available for pre-order currently and they both look amazing!

I just had to throw another Nendoroid onto this list because I mean, look how adorable this Stone Ocean Jotaro Kujo Nendoroid is. I am a huge fan of Jotaro’s outfit from Stone Ocean, and the poses that are available for this version are absolutely amazing! You can even do the scene with the disc that wounded him, you know this one:

Anyways, this Nendoroid has multiple faces, as well as punching effects from his Stand, Star Platinum. This means you can recreate some of your favorite combat scenes if you have other Nendoroid figures. The pre-order over at the Crunchyroll store is closed, but you can still pre-order him on the Japanese store AmiAmi. 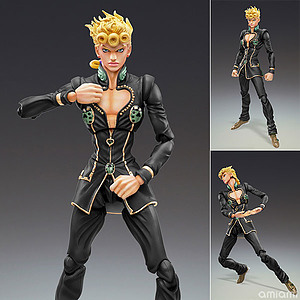 I am a huge fan of Giorno, and this black Super Action Statue looks great and is a huge change from the pink you usally see him in. Just as the rest of the product series, this Giorno figure can be set into different poses, and comes with a variety of different hands that you could interchange depending on which pose you wanted to put him in. This figure is slated to be released any day, but you could still pre-order it from the Japanese website AmiAmi. 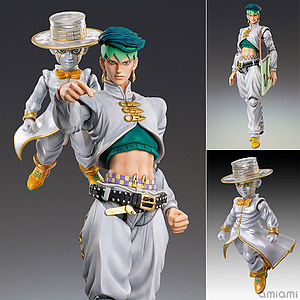 This figure is definitely making it onto my list because the design, colors, and detail are just amazing. Also for this particular one, I am not just highlighting two separate figures. This is a set and actually comes with Rohan Kishibe as well as his Stand, Heaven’s Door. You can find these two figures for pre-order at the Japanese store AmiAmi.

Acrylic stand-up figures have been all the craze lately, and this collaboration with Tokyo Skytree is super cool and is limited so if you like acrylic figures you should definitely grab one while you can. I see some of these going on eBay for three times the amount you’d pay getting it from Japan. These were just released last month and will be only available for a limited time so head over to the Japanese store Aitai Kuji if you are interested in one.

There are definitely a lot of figures for Jojo’s Bizarre Adventure out there and this list doesn’t even begin to touch all of them but these are just my current favorites. If you like figurines you should definitely keep an eye on the Japanese store AmIAmi as they constantly update their inventory with new products. Many places also do re-runs of popular figures so if there was something you missed out on, you should definitely check back often so see if the figure you wanted came back for a re-run.

If you are looking for some art prints or stickers don’t forget to check out my shop at YoshikoArts.com/shop. If you want to see my latest artwork follow me on Instagram at @Yoshiko_arts. If there is something you want to see in print, send me a message on the contact form.